For Christmas I gifted one of my sisters with a copy of (500) Days of Summer. 10% of my reasoning behind it was that I thought she would enjoy it and the other 90% was purely selfish, because I was dying to see it! 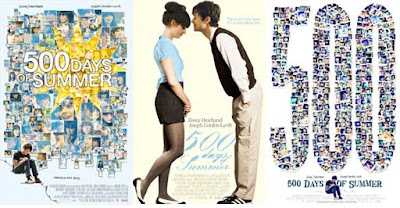 I don’t want to give too much away for those that have yet to see it, but I would say it’s a must see if only for the amazing soundtrack. I’m not going to lie I thought it was going to become my new favorite movie and had very high hopes, but in the end I simply just enjoyed it.

One reason that I’m very happy that the movie was misplaced when dear sister was trying to pack up all her gifts (aka it is now with all my DVDs! Ssh) was Summer’s apt. I fell in love at first sight.

Due to Summer’s (Zooey Deschanel) brilliant blue eyes she wears shades of blue throughout the entire movie along with blue also making a strong presence in her apt.

I love toile! Normally one would probably think it would be a little too overwhelming to have it above and below the chair rail in room, but in this apt it just works! It adds a wonderful charm to the space and works just right with her personality.

Summer has a great collection of artwork that in the beginning of the movie she has simply stacked in front of a faux fireplace.

As the movie progresses you see Summer’s apt change a bit.  Now that she has fully moved in artwork has been hung and voila a bar cart has been added! I think the whole blog world would approve of that move.

Here you can catch more of the toile wallpaper that covers the main living area of the apt!

Love the twinkling lights on her headboard. Also blue!

I know this post is about Summer, but I must included a little sneak peek of Tom’s apt. My favorite has to be his chalkboard wall!

Here it is in the beginning of the film:

I love that the headboard is simply drawn in chalk.

Here it is later on in the film with some of his architectural drawings.

At one point Tom has, “ This is not a love story, but a story about love” written on his wall. This totally sums up the movie correctly.

I’m now actually itching to watch it again! I think I was perhaps too harsh with my first viewing.  So, dear readers have any of you caught this film yet? Thoughts?