Since times are tough and lately it seems like things keep getting worse instead of better one of things that we are all trying to do is cut back.

Not exactly good news for people in the design world, but I’m hopeful that things will be changing soon.

Just because you don’t have a huge budget doesn’t mean you can’t make a couple of little purchases to change the look and feel of a room. I know when I get the itch to re-decorate nothing will stop me not even lack of funds.

When we moved into our home many things needed to be done on a budget. Our kitchen was one of the main places were we tried to save costs. Everything needed to get knocked down and we pretty much had to start from scratch. All of the cabinets are from IKEA and instead of going with a basic knob I decide to glam up my kitchen a bit with a more interesting type of knob. Little did I know that there wasn’t much to choose from. Home Depot had really blah choices and their prices were not all that. Anthropologie had amazing choices, but no way could I spend $12 a knob when I had 20 knobs to order. I started to think it was hopeless until one of my Internet searches turned me on to: D. LAWLESS HARDWARE.

They have lots to choose from and their prices are just right. I immediately feel in love, because they had milk glass and jade milk glass knobs. Milk glass is one of my weaknesses so I knew that these were knobs I was going to order. Now deciding between the white and green took a long time and I changed my mind about 3 times and they were nothing, but sweet about it.

In the end I went with the Jade Milk Glass:

I ordered knobs and pulls and used them throughout my kitchen. 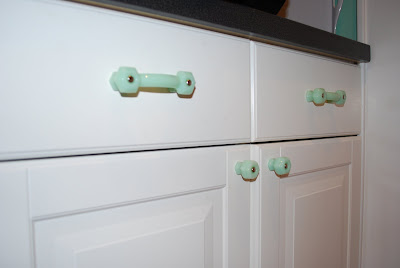 We also wanted some space in the kitchen for eating. While we didn’t have enough room for a table and chairs we were able to purchase a great kitchen island with two stools. Again staying on a tight budget we went to one of my favorite home resources, JC PENNEY.

I also glammed it up with some new knobs, but this time I went a bit smaller on the size: 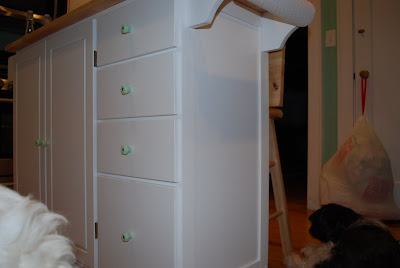 * Excuse the white fluff. That’s Jovi (yup after Bon Jovi) my mom’s pup who was over for a visit and did not want to get out of the shot*

Another room in the house that pretty much stayed the same was our guest bathroom. There was nothing wrong with it when we moved in, but I wanted it to look more like me so up went the bead board from top to bottom, Amy Butler fabric was also bought in for the curtains and of course I had to change the knobs as well.

D. Lawless also has a great selection of Antique glass knobs that are translucent and come in many different shades.

Here are they are in the bathroom: 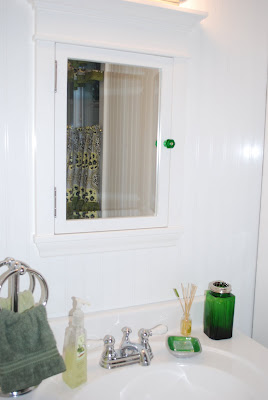 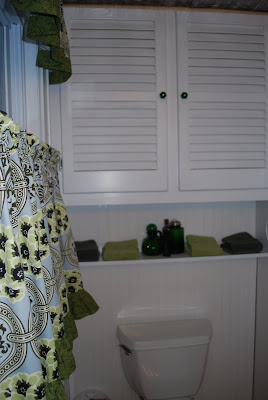 The purchase of all those knobs and pulls in no way broke the bank and they really helped me add a special touch to the rooms in a place where details like a knob are normally lost in the shuffle.

So if you are in search for an inexpensive fix for a boring kitchen or bath then I would go with some new hardware that will have you hob-nobbing with the best of them.